Back in May 2015 we listened with interest to a representative of Eircom,(Now Eir) discussing broadband access in Ireland, explaining to a radio interviewer how they were going to work with Government on the roll out of high speed broadband to all and sundry in rural Ireland. The programme to be supported by the exchequer. Apparently we have about 700,000 people who have built their houses so far from civilisation that it will take up to €10,000 of Taxpayers money to connect some of them to Broadband. This is the point to call Stop! 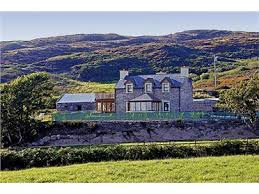 There are a significant number of this 700,000 who, with the acquiescence of the planning system, decided to build their detached little “South Fork” pastiche home up on “The Hill” or down the winding “Boreen” as far away from their neighbours as possible. Of course they now expect to have all public services provided by the taxpayer, including a Hospital or a least an Ambulance at the end of their winding driveway.

We have a real case of the chickens coming home to roost here, these Baby Boomers and Tiger wannabes who wanted to live far away from their neighbours as possible, certainly refusing to think about the possibility of living next door to some smelly neighbours in a Town or Village, have now discovered that they made a bit of a mistake and they want the rest of us to pay for it. As far as I am concerned they can take a hike.

The policy of allowing individuals to build their homes anywhere that suited them and demand that the community follow their stupid decision with services should never have happened and needs to stop and in fact be reversed.

At the same time as having to deal with these self inflicted hermits, we have our Towns and Villages dying for lack of population, with services closing because of lack of support.

This is my solution. All housing must be built within a reasonable distance of either a Town or Village that provides what we regard as “public services” I suggest that the distance to the centre of the Town or Village should be that which a reasonably fit sixty year old can walk within 45 minutes.(about 5k)

We then use taxpayers money to subsidise public services to the same level as those available in larger conurbations within the designated catchment area of the Town or Village.

If you live outside the catchment area because that’s where you built your dream home, you pay the full economic cost of your own folly and our hard earned taxes can be used for more useful purposes.

€10,000 to connect someone to Broadband, The Lunatics have taken over the asylum…….